Josh Niland on how to choose your fish

Fish is an ingredient that has garnered a bad reputation; they can be hard to work with and even harder to cook correctly. Josh Niland turns all of these misconceptions on their heads in The Whole Fish Cook Book. In this extract we've provided, he breaks down how to choose fish and make sure the fish you're buying is good-quality and fresh.

One of the most enjoyable parts of my day happens in the morning, when I have a text full of fish options from my buyer at the market. This interaction with him is crucial in making good choices for the restaurant and butchery. In addition to this relationship, we also deal directly with local and interstate fisherman. This allows us to work in slightly greater volumes and also eliminates some of the (understandable) middleman costs associated with going through market spaces.

Conversations with fishermen throughout the week are also important for giving our team at the restaurant an insight into their world as well as their struggles, whether those are weather-related or other unforeseen issues, as it helps us to understand the price value of the fish and why some fish just aren’t available in a particular week. Direct rapport between the chef and the fishermen allows us to educate our front-of-house team not only about different fish species, but also about where a particular fish has come from. It is a powerful thing to be able to tell a customer the name of the fisherman who caught their dinner.

Knowledge of the source of the fish can also inform us about its flavour profile. If you know that a fish has fed on crustaceans or seagrasses, then it can be slightly easier to recognise distinct flavours when tasting it. Understanding the flavour of a fish often aids in a better decision on what garnish to pair with it or even a logical method of cookery. Often, the flavour of a fish is described with adjectives, such as flaky, creamy or delicious, and not actual words that best highlight a potential flavour profile and which might encourage the consumer to diversify their choices. Too many fish have a bad rap for their perceived flavour profile and are thrown aside as inferior options.

Before any of this can be considered, though, we need to understand what it is we are actually looking for in regards to quality. Your instincts as a consumer should place you in the best position to buy an excellent fish, and the following details should all be taken into account. 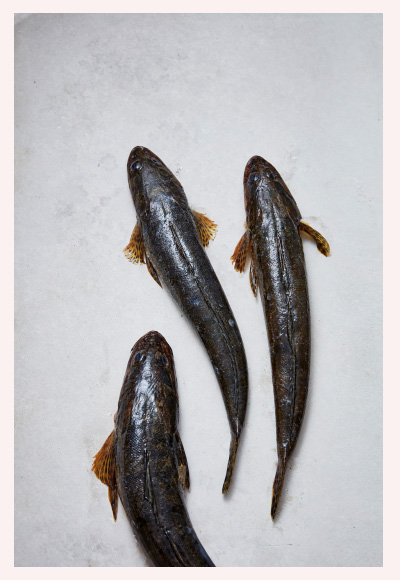 1. A fish with a firm mucus covering and shiny coating is the first sign of a good-quality fish.

This is something you can check visually by looking at the scale coverage across the fish. The mucus of a fish was something that always seemed a mystery to me when I first started learning about fish. The mucus basically provides protection to the fish in the open ocean by trapping pathogens that would cause disease. Antibodies and enzymes in the mucus actively attack those pathogens to protect the fish. When an old mucus layer containing the pathogens is shed, it is replaced by new mucus and the pathogens are lost. Any visual damage or imperfections on a fish can suggest poor handling, prolonged direct ice contact or variable temperature control.

2. The eyes of a fish are a determining factor of a healthy, fresh fish.

A fish’s eyes should look bulbous, be risen slightly from the head and look moist, bright and clear. There are, however, times when a fish that looks spectacular in every other way can have cloudy, slightly foggy eyes. This is predominantly due to the fish being chilled too quickly post-harvest. Note: If you see a fish at the market with eyes that protrude considerably from the head, rest assured there is nothing wrong with it. This is an example of barotrauma, where a deep-sea fish has been caught at great depths and the large change in pressure caused by it being brought to the surface causes the eyes (and often also the stomach) to become more visually prominent than other species.

3. A fresh fish should not smell fishy

As not every supplier or seller will allow you to handle the fish they are displaying, it is best to revert to your nose. Even the fish I dry-age for upwards of twenty days carry little to no aroma. The only smells a fish should have are a light ocean water smell sometimes comparable to mineral driven aromas, such as cucumber or parsley stems. If a fish smells ‘fishy’ (see page 78), with an odour comparable to that of ammonia or oxidised blood, then it is best to avoid it. Unfortunately, no matter how much culinary genius you may possess, there is very little that can be done to rectify a fishy fish.

4. Iridescent bright red gills are an almost guaranteed indicator of the freshness of a fish. 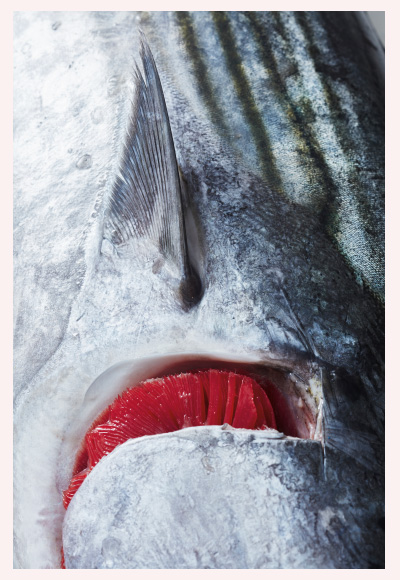 Fish force water through their gills, where it flows past lots of tiny blood vessels. Oxygen penetrates through the walls of those vessels into the blood, and, in turn, carbon dioxide is released. The redder the gills, the fresher the fish. Where slime and mucus are desirable on the outside of a fish, the gills should be slightly drier and clean of any debris.

5. If your fish is frozen, look for freezer burn or crystals.

If you see them it means the fish has been thawed and refrozen, which affects quality. Overall, in terms of flavour and texture, fresh farm-raised fish is often preferable if a wild-caught product is unavailable and frozen is the only option. But if you decide to go with frozen fish, just know that some fish types do better in the freezer than others – lean white varieties, such as snapper and cod, tend to become dry when frozen, but the fattier types, such as tuna and Spanish mackerel, should be fine even when frozen.

This list of freshness quality points may, at first glance, seem hypocritical to the work we do at Fish Butchery and Saint Peter with regards to ageing fish (see page 29), but to produce profoundly unique flavour and texture profiles in aged fish, one must first find the most extraordinarily fresh fish and handle it well.

Finally, a word on sustainability. The topic of fish sustainability confuses home cooks and chefs alike. I see sustainability as a topic that requires a three-pronged approach. First, you need to be aware of the stock status of the fish species (this information is available online from your own local fisheries body). Second, you need to be aware of the practices of the fishermen who have caught your fish. Was the fish trawled in large nets or was it individually line caught? Finally, waste minimisation in the kitchen, which is achieved through both careful handling and storage of fish to maximise its shelf life as well as using the whole fish including its offal. 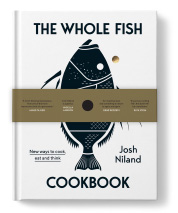