Tim Costello on World Vision During The Big Wave

A Lot With A Little by Tim Costello

Tim On The Impact of The Big Wave and Cyclone Nargis

Tim Costello is one of Australia's leading voices in social justice and global poverty. He has travelled the world for work in poverty and emergency relief and led World Vision in Australia for more than 12 years. The below is an extract from a Chapter 18 of his new book A Lot With A Little, about his work during the devastating Tsunami of 2004. 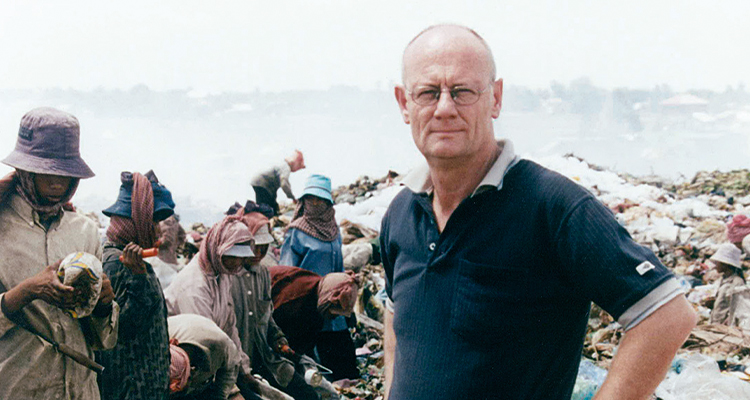 Christmas and summer holidays are the best season in my year. Between family festivities, food and beach cricket, it’s my opportunity to just turn off. On the morning of Boxing Day 2004 I was visiting my sister and her family when early reports started on the news of a tsunami in the Indian Ocean. It was troubling, but not troubling enough at that stage to put me off my break. I left my sister’s home and headed with 80,000 others to the Boxing Day Test at the Melbourne Cricket Ground. I met Merridie’s nephew Tim and a few friends and we settled in for the match. Soon my phone started ringing with updates about an earthquake off the coast of Thailand. After an exhausting year, my first as a CEO in a complex organisation, it was the last news I wanted to hear. I needed a break. Didn’t we have a team to handle this and let me relax? I didn’t immediately leave the game; I kept thinking it would settle down and so I awaited follow-up calls and watched the game. I knew it would demand some kind of response but not necessarily from me today, and surely one had to get the facts straight first. I am not sure I even mentioned it to those I was with. Cricket is pretty sacrosanct on Boxing Day.

“The scale and size of this disaster just kept growing. When would it stop?”

But the reports dribbling in doubled the death tolls with each hourly bulletin. The scale and size of this disaster just kept growing. When would it stop? I finally realised the cricket was off for me. I started making phone calls from the MCG to get my team to book a flight to Sri Lanka, as from what we could tell that was the focus of the damage. (I would also go a few weeks later to Banda Aceh in Indonesia, which we would later know was the epicentre in terms of death and destruction. But the Indonesian government had not allowed any news out.)

Elliot and Martin (Tim’s sons) were about to head off on a twenty-day work party trip to Israel with Merridie’s (Tim’s wife) brother Paul and his wife Merrill. At the same time Claire was leaving for New Zealand for a ten-day holiday with a friend. So within twelve hours Merridie was left alone on the summer holiday we did not get to have. Like the rest of Australia she was transfixed by the coverage of this massive disaster that kept growing by the day. The death toll doubled every day for the next few weeks.

I landed in Colombo within forty-eight hours of the disaster, with some of the Australian press accompanying me. The World Vision office there was already chaotic. Fear had gripped the capital and shock was in overdrive. There was urgency everywhere; panic was taking over. Many of our staff had relatives missing and some wept as they tried to work. The office was stiflingly hot and its walkways now crammed with packed relief boxes, as the warehouse nearby was chaotic. It was a melee, with staff shouting, packing, making phone calls and frenetically sorting the supplies in the warehouse, the entrance of which was now reduced to a snarl of traffic with trucks loading pallets and heading out. The scale of destruction continued to grow, and nobody could believe what had happened.

“We travelled a lot of that distance in silence, as words couldn’t encompass the trauma we were watching unfold.”

The Sri Lanka National Director was shell-shocked, and visibly relieved I had arrived so promptly. Nothing had prepared him for what was unfolding. He was physically shaking. He and I joined a convoy of World Vision vehicles loaded with relief supplies to commute down the narrow coastal road to the city of Galle, which was the epicentre of destruction. We found that what was normally a three-hour trip took us twelve hours. The one-lane road was destroyed in parts and every second private citizen in Colombo had taken to it with a packed car loaded with water, food and blankets. Commendable that they were taking relief work into their own hands, but the disorganisation only slowed things down. We were passing coastal scenes of flattened palm trees, destroyed houses and villagers silently staring out to sea, hoping the body of a loved one might be washed up. We travelled a lot of that distance in silence, as words couldn’t encompass the trauma we were watching unfold. It felt to me like an apocalyptic scene, and the silence was eerie. No birds cawing, no children running and playing.

On the way we stopped, as there was a hold-up with cars lined up in front of us. Getting out of the truck we walked to where we saw the wreckage of the Queen of the Sea passenger train on its side. It had been packed with 1500 passengers returning to Galle for Poya, the holy full moon celebration, and had been thrown from its tracks with the force of the wave. Later I was to hear that only 200 passengers survived.

We finally got to Galle as the sun was setting. The putrid smell was the first thing that hit me. We were walking towards mass graves just outside the famous cricket ground where Shane Warne got his 500th test wicket. There I saw grim locals, some in white coats, putting tags on fingers and trying some rudimentary identification before lowering corpses into a mass grave about 10 metres wide and long. It was a deep hole but I could see bodies piled on bodies. Bystanders stood in shocked silence. The silence was disturbing but it was broken by the sound of other mass graves being prepared nearby. The smell of death hung like a cloud in the humid air. It was something for which nothing can prepare you. When you stare death in the face you become profoundly grateful for the sheer gift of life. The majority of bodies were women and children unclaimed by loved ones in death because the chaos and confusion was just so great. The rapid burial was to avoid the spread of cholera, which could create a disaster equal to the wave in scale if unchecked. I later discovered why so many of the bodies were women and children. It was because men could run faster or hold onto a tree or climb out of reach of the wave. The stronger survived.

“What I saw changed my life. Up until then I had still an optimism and a confidence in my own abilities to change things for the better.”

What I saw changed my life. Up until then I had still an optimism and a confidence in my own abilities to change things for the better. That optimism dissolved in the face of such wide-scale death. The sight of bodies being lifted or thrown into large open graves, the stench from those bodies lying in the heat for over forty-eight hours, the sound of wailing, of voices calling names, and the look of bewilderment on so many faces all pressed in on me. The total deaths across the affected seven nations would be nearly 300,000 people. And in India, Thailand, Indonesia, Sri Lanka and even the Maldives, the living now had the massive job of reconstruction. All words of explanation fall to the ground in the face of such death and devastation.

“But one thing I did discover was that faith was the only resource the poor had, whether it was the Buddhist faith in Thailand and Sri Lanka, Hindu in India or the Muslim faith in Banda Aceh.”

But one thing I did discover was that faith was the only resource the poor had, whether it was the Buddhist faith in Thailand and Sri Lanka, Hindu in India or the Muslim faith in Banda Aceh. As great as the destruction, equally the reservoir of faith was tapped into in order for them to start again. It truly was the main resource to face getting up to grieve and clean up after burying their dead. I realised that my question – of where God was and how he could be good and all-powerful to allow this – was a luxury. I emerged from a Western self-sufficient context. We have more mastery over disasters, and professional services to respond. We could mitigate some of the pain. Counselling or therapeutic services would swing into action for the bereaved. There were no such services that I saw in Sri Lanka. I saw in these countries that without their God or gods they have no reason to start over again and no reason to try to live.

Seeing Australians back home respond to this scale of death and disaster was overwhelming. We are a coastal people and I think we all imagined what we would do if a wave like that hit us. In my state of Victoria, the death of a loved Melbourne football star, Troy Broadbridge, in the tsunami communicated to young men that if he, so fit and strong, died, then this was immense. The grief and fascination with the wave of death gripped Australians at home, on holidays and watching the disaster unfold on TV, and it was heightened that Aussies staying in Thai resorts had died. We hear grief so much more clearly through the frame of national loyalty, articulated by an Aussie accent. 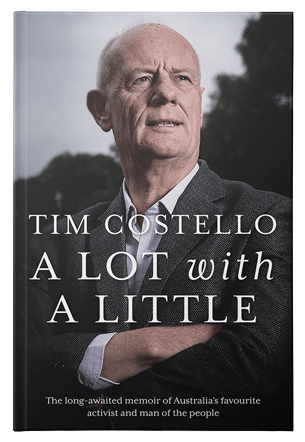 All text extracted from A Lot With A Little by Tim Costello.
AVAILABLE NOW at your local bookstore and online.
Click here to buy online.