A Vote of Thanks from Niki Savva 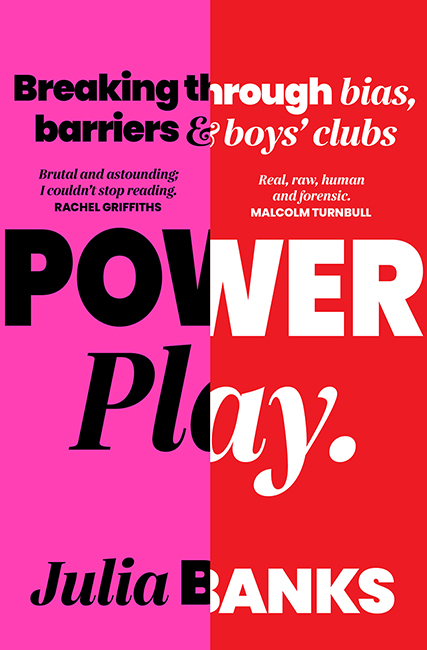 In a time when women in Australian politics are finding their voices and sharing experiences, Julia Banks opens up in her book Power Play about her time in parliament.

To celebrate the launch of Power Play the Australian National University invited Julia to join them for their incredibly popular 'Meet the Author' event series. The day after the book was released Julia was in conversation with Virginia Haussegger AM about the book, the realities of life in Australian politics, and why women aren’t the problem – but why more women in decision-making positions are the solution.

Sometimes the conversations at these events are so poignant and timely that what is said stays with the audience long after the last book is signed.

That was the case with this event when award-winning author and ABC Insiders regular Niki Savva closed out the night with a 'Vote of Thanks'. Savva so perfectly summed up the feeling in the room, applauding Julia for bravery and resilience, that we wanted to share her address.

We have heard Julia explaining her decision not to name some of the sleazy individuals who harassed and hounded her, by saying she is not fearless. Not true.

It has taken courage to out them, to paint a picture of a bullying, deceitful prime minister, and to be here tonight talking about it. Thank you Julia, we owe you.

It was said that older women became invisible. That also is no longer true. Together with the younger women who have stepped out of the shadows, they have combined their formidable power. They have used their voices on all available platforms, especially those media outlets dominated by women, to force change in critical areas too long ignored.

They have challenged the most powerful people and institutions in the country.

Everywhere you look, women are leading or dominating the national conversations – in politics, in media, in health and in social reform.

There has been an extraordinary confluence of events and people.

Articulate, passionate women beginning with Grace Tame, followed by Brittany Higgins, triggered a movement which forced the Prime Minister to face a problem he showed an inability or an unwillingness to confront.

And if he, or anybody else thinks they – we - are going to go quietly into the night, they are kidding themselves.

So thank you Julia- and Virginia- for being part of that very important story.

There are so many disturbing things in Julia’s book, but the most disturbing for me is that someone who could have helped make politics better was so easily discarded.

You would think the Liberal Party and its leader would do everything possible to keep someone like Julia Banks.

You would think they would have valued her not only because of her gender, but because of what her brain, her spirit, her experience and her perspective would have brought to the modern Liberal party. It’s not like they’re brimming over with talent these days.

And yet she was threatened and bullied first out of the Liberal Party, then out of the parliament after the brutal coup of 2018 which saw Scott Morrison become prime minister.

Julia was not the only woman mistreated during that shameful period, but she is one of the few brave enough to talk about it and now write about it.

She has laid it bare in Power Play. And made it clear that the orchestrated campaign to drive her out came from the very top.

She experienced first-hand the bullying, the belittling, the thuggery, the threats to endorsements. Julia’s book is a shocking indictment of the elected leader of this country.

Unfortunately, while it is shocking, it is not a surprise.

It is also not a surprise that a number of her former colleagues including women, whether out of great fear or great ambition have refused to acknowledge the truth.

Worse, others named as perpetrators who condemned her for speaking out, now feted and honoured, who have set themselves up as victims, are formally consulted for solutions to problems they helped create.

We look to our governments, our leaders and our elected representatives to set the moral and legal standards to guide us in how we should treat one another.

While there are good people in politics, too often they don’t survive. Many of those left lack the courage to take on the big issues. They not only lie to us, they lie to each other.

They think fancy footwork, smart talking and staged photo ops will compensate for a lack of action. They take us for fools.

We need to pay really close attention to what they do, then compel them to be better and to ensure the good people who are left are supported.

But nothing will improve if people continue to insist there isn’t a problem or join the cheer squads or stay silent.

We rely on people like Julia who have experienced first-hand the good and the bad of life in politics, to tell us what really goes on behind the stunts and the spin.

Power Play does that and I applaud Julia for having the strength of character and the stamina to produce it.

Thank you very much Julia and thank you all for coming.

Wish you were at the event? You can listen to the podcast of the live event here: