The Best Ramen In Tokyo

Only In Tokyo - Kagari

Ramen Doesn't Get Better Than This

Ramen is a must-have in Japan. This delightful noodle dish is one of the most popular foods to eat for locals and tourists alike, and little ramen shops and stands are dotted around Tokyo city. Luke Burgess and Michael Ryan have tried their fair share and in Only In Tokyo, they share their experience with a couple of special ramen shops that stand out from the rest. This extract features Kagari, which gets a resounding recommendation from these pro cooks.

If you were to eat only one bowl of ramen in Tokyo (crazy thought, I know), Kagari would be a very good choice.

It has only been open about five years, in a number of different locations, but in that time has garnered a reputation for producing one of Tokyo’s tastiest and more unique bowls of noodles.

The first is a chicken-based soup, rich and creamy from the chicken fat in the broth, with fine wheat noodles. It is like a chicken version of the classic pork tonkotsu, and may sound heavy but is actually quite light, yet with an intense chicken flavour.

The second option is a rich, salty broth made from niboshi (dried sardines) and seasoned with shoyu (soy sauce), with the same noodles.

The third option is their tsukemen ramen. In this dish the noodles are served cold and separate from the broth, the idea being that the noodles don’t overcook sitting in the hot broth. Kagari’s tsukemen is perfectly executed. Tsukemen noodles give you a real textural bite, and the rich broth is thicker, so the broth sticks to the noodles as you dip them in.

The popularity of Kagari comes with a cost – not in money but in time.  There is never not a queue out the front, with varying wait times depending on the time of the day, ranging from twenty to thirty minutes to well over an hour. The place only seats eight, but the queue does progress quickly.

Keep this in mind when you finally get your seat at the counter. This is not a place to linger over your bowl of noodles, or for casual conversation, or scrolling through your social media feeds. This is a place to eat your noodles and get out – then contemplate the magnificence of the ramen on your way back to the subway. 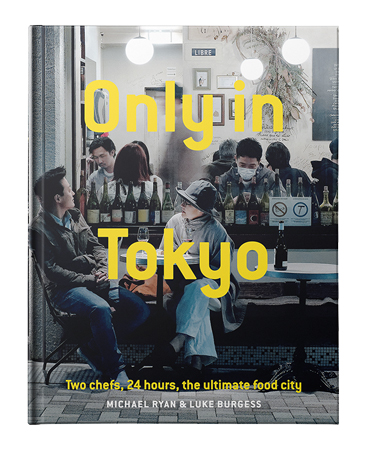 All text is extracted from Only in Tokyo by Michael Ryan and Luke Burgess.  AVAILABLE NOW at your local book store or online.  Click here to buy online.