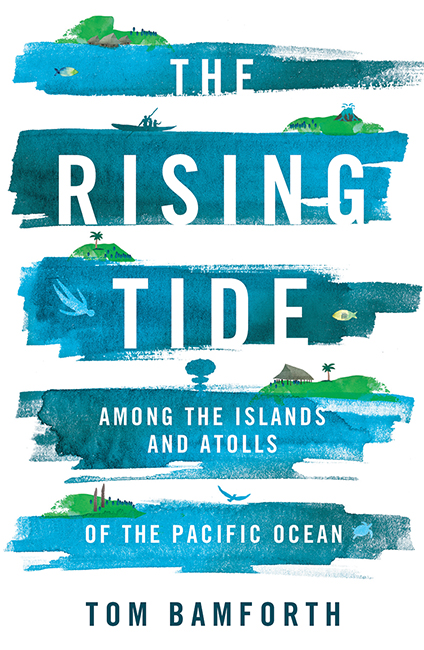 Vanuatu. Fiji. Marshall Islands. The names evoke white-sand beaches, swaying palms and lazy holidays. But in reality, these idyllic places are tropical maelstroms of global realpolitik, caught between the world’s superpowers, former colonial masters and tin-pot despots. The Rising Tide by Tom Bamforth masterfully weaves the stories of people at the forefront of global change around a broader narrative of political mismanagement, culture, diplomacy and identity. The following extract discusses the legacy of nuclear tests in the Pacific Islands.

Testing times: The legacy of nuclear tests in the Marshall Islands

On the first of March 1954, Bikini Atoll in the Marshall Islands was evacuated to make way for ‘Bravo Shot’ nuclear test - one thousand times the strength of the Hiroshima bomb.  The Bikinians were told the test was “to end war and for the good of mankind”. As they left their atoll home, they sang “you are my sunshine, my only sunshine”.

“There were two suns that day”, a survivor from the Atoll of Rongelap, a hundred kilometres from Bikini, tells me “we thought the world was ending”. “Then we saw snow in the Pacific for the first time. It covered my skin and hair, children played in it”. But what seemed like snow was radioactive fallout. “Later my hair fell out and my skin peeled off. I don’t know why I survived, but I’m very lucky” he says. There was horror as woman gave birth to boneless ‘jellyfish babies’.

Alson Kelen is a traditional navigator and former mayor of Bikini Atoll. “Canoe-building and navigation in the Marshall Islands originated in Bikini” he tells me. “The trees were planted on the windward side of the atoll to ensure they grew curved for the boats’ hulls. The trees grew slowly and so grandparents planted for their grandchildren. The boats were light and fast – able to speed on the winds nearly a thousand kilometres between the dispersed atolls in days”. “Marshallese”, he tells me, “navigate with their stomachs. They practice ‘wave navigation’, feeling the swell of the ocean and recognising its direction. During the day, I close my eyes to sense the movement of the Ocean. The atolls, the trees, the canoe-building, the ancient navigation: to us everything is connected. It stopped on 1 March 1954”. Like the Russian, British, French, and Chinese nuclear tests, the US tests targeted remote, indigenous lands and people who were regarded as ‘savages’.

Between 1946 and 1958 there were sixty-seven nuclear tests - the equivalent of 1.5 Hiroshima bombs per day - in the Marshall Islands which was a United Nations Trust Territory administered by the US. Marshallese protests to the UN were ignored. “There are only 90,000 of them. Who gives a damn” said Henry Kissinger.

Dr Merrill Eisenbud of the US Atomic Energy Commission observed that “these people do not live the way Westerners do, civilized people, it is nevertheless also true that these people are more like us than mice”. Declassified documents now show the fallout was more extensive and less accidental that claimed. The wind direction was known to authorities well in advance and the sinister US Department of Energy Project 4.1, changed its title from “an enquiry into the effects of radiation in mice” to test on humans.

The nuclear legacy is ever-present in the Marshall Islands. The island of Ebeye, next to the Ronald Reagan Ballistic Missile Test Site on Kwajelein Atoll, was settled with people from Bikini and Rongelap who had been displaced by the tests. It now draws people looking for work on the base and eleven thousand people are packed into 32 hectares. On the base, there is a golf course, bowling alley, schools, and a yacht club. On Ebeye, there are water shortages, half of young people don’t attend school, overcrowding and minimal the medical facilities.

“They’ve found plutonium in the lagoon” says Abacca Anjain-Maddison an activist from Ebeye. There is also contamination from missiles and intercepts fired between Kwajelein and Vandenburg Air Base in California. At the Environmental Protection Agency, I ask about the health consequences of plutonium and missile debris. “We don’t know - that information is not shared with us. Our children get sick and sometimes when there are tests, the chickens suddenly die. We want to know why but there is no information”. There are also pressing local concerns including untreated sewage and lead poisoning from the rubbish dump.

Elsewhere, nuclear waste is an even greater concern. Enewetak Atoll hosts the Runit Dome – an immense concrete sarcophagus containing radioactive material from the tests. But this wasn’t sealed and the radioactive matter leaches through the porous coral and is gradually washed into the ocean as sea levels rise.  The Marshall Islands are “where the atomic age meets the climate change era” observes Alson Kelen.

There is pressure for the Bikini community to return. In a meeting at the American Embassy, Kelen was told to return but not to “eat fish or coconuts or dig the soil and we were told to keep our children inside. I asked the officials if they realised we are adults”. “We will never go back to Bikini” he says “it lives on as an idea, a culture we preserve through teaching navigation and canoe-making. This is not just about preserving tradition – it is about finding a sustainable future”.

American and Chinese security scuffle over the ‘nuclear football’ – the black leather briefcase containing the US President’s nuclear launch codes – during a visit to Beijing. Donald Trump and Kim Jong-un debate whose ‘button’ is bigger. Australia embeds itself ever deeper into the US security network in Asia and the Pacific as anti-Chinese rhetoric heightens. During the Cold War, the logic of two nuclear-armed superpowers assured of mutual destruction may have kept the peace. But the proliferation of such weapons has unfrozen the Cold War and once again pose an existential threat to us all. For Marshall Islanders, it is over sixty years yet their nuclear legacy remains ever-present.

The Rising Tide by Tom Bamforth is NOW AVAILABLE at your local bookstore or online.