The Importance of Understanding Aboriginal Life and Culture

The Australian curriculum in many schools is sorely lacking in Indigenous content and available materials on First Nations people’s cultures and histories, written by Indigenous authors, are limited. Welcome to Country: Youth Edition by Professor Marcia Langton will ensure that new generations of young Australians don’t have the same experience as their parents. The following extract explains the importance of learning about the rich and long history of Aboriginal and Torres Strait Islander people in this continent that spans more than 60,000 years.

Australia is alive with the long history of the Aboriginal and Torres Strait Islander people, our cultures and our stories. Nowhere else in the world can you see and experience the oldest living cultures of humankind. There are two Indigenous cultural groupings in Australia: Aboriginal peoples on the mainland and most islands; and the Torres Strait Islanders, whose homelands are in the Torres Strait, between the northern tip of Queensland and Papua New Guinea.

People are believed to have settled on the Torres Strait islands about 20,000 years ago. Scientific research carried out in the past few decades has shown that Aboriginal people have been living on the mainland for more than 60,000 years. Archaeologists have uncovered evidence of people living in Arnhem Land, in the Northern Territory, 65,000 years ago. As new evidence and more advanced dating technologies become available, archaeologists in the future may discover that this number goes back much further.

Learning about Aboriginal life and culture

The impact of Aboriginal life can be found across the Australian continent and its islands, but it is often invisible until it is pointed out to you. In this book, I hope to show how Indigenous people cared for this land and developed their knowledge, cultures and stories over thousands of years. Once you understand this, you will begin to see the country around you differently. Indigenous people are finding ways to reach out to all Australians to tell them about their knowledge, cultures and histories. They want school students to know that the Indigenous communities are strong, resilient, rich and diverse. They want young Australians to go out into the world with a respect for the First peoples and everything they have achieved. Aboriginal and Torres Strait Islander parents, grandparents and great-grandparents have a burning desire for their young people to learn about their own rich cultures and achievements, so they can feel proud of them. Indigenous students should be able to learn about their cultures in every year at school. That way, they can take part fully in all their subjects and build their self-esteem.

Many Australians think that the only ‘real’ Aboriginal people are those who live in the deserts. This idea is based on two centuries of racist views that were wrong and should have no place in modern Australia. The official population of Aboriginal and Torres Strait Islander people will reach one million in the next decade. Over the last century, Indigenous people, like many other Australians, have moved from the rural and remote areas. Now the majority live in cities and towns. The rest mainly live in small towns and Aboriginal settlements and communities scattered across the country. Even in the largest cities, such as Sydney and Melbourne, many Aboriginal people have kept many of their traditional customs. In some cases, they have gained the right to own and manage their land and waters. Also, they have found ways to keep their languages and cultures alive and to remember their history.

Hope for the future

My generation of Aboriginal people want young Australians to be taught more about our history and culture than we were. I have met very few Australians in my generation, or even among younger people, who learnt anything in school about Aboriginal and Torres Strait Islander people. Many have told me that if they were taught anything at all about our peoples, it was not correct and often racist. In 2006, I wrote the Prologue for First Australians, the book that accompanied the award-winning television series on Aboriginal and Torres Strait Islander history produced, written and directed by Rachel Perkins. I explained in the Prologue how learning Australian history in school in Queensland, more than fifty years ago, was painful and boring:

The occasional Aboriginal characters represented bore no resemblance to the people I knew and had grown up with. Gradually, there was a dawning realisation that I was seen by my teacher and classmates as one of ‘those’ Aborigines. History was for me a terrible burden, because it was in this class that I learnt that people like me were hated; and that the only stories that were told about us provided a steady stock of evidence about our supposedly shockingly violent tendencies, savagery, and most importantly – our innate tendency to steal and pilfer.

When Rachel Perkins and I looked at how Australian history was taught in the past, we found that most textbooks made it seem that our people disappeared or died out completely in the early nineteenth century. If the writers of those books did say that there were a few survivors, they wrote about those Indigenous people in ways that were disrespectful and dehumanising. They did not acknowledge our ancient and important history. Gradually, the attitude started to change as new historians began to write our history. They understood that it was important to record the lives of ordinary, as well as extraordinary, people.

Rachel Perkins is one of Australia’s most well-informed and creative television and film producers; she is also an award-winning director and writer. She was surprised that, while the school and university textbooks generally didn’t include anything about the Indigenous peoples’ cultures and knowledge, there are mountains of historical sources about our stories. That is, history books, journals and research documents, for example. In her Producer’s Statement, she said:

When SBS first came to ask me if I were interested in doing a major documentary series on Indigenous history I enthusiastically agreed although I had no idea what it would be.

In making First Australians it has been common for many to ask why hasn’t this story been told? The truth is these stories have been told, at least in print, by the historians we feature in our series. There is more being written all the time and there is a substantial body of work to be found in good libraries if you have the interest.

There are thousands of resources that can help you understand the great and positive impact the First peoples have had on this country. For information about some of these, go to the Resources section at the back of this book.

Sharing our knowledge and stories

While it is impossible to cover the wealth of Indigenous knowledge in one book, I want to show you that we have thousands of years of history, customs and stories. We are proud of our heritage and rich cultures and we are pleased to share them with other Australians. I encourage you to use this book as a way to begin to explore the world of Indigenous Australians. Through it, you can learn about our important and fascinating past, and our many contributions to modern Australian life. Your own sense of pride for the Indigenous cultures that have made this country will grow, and you will be a well-informed ambassador for the long history of Australia, most of which was Aboriginal. 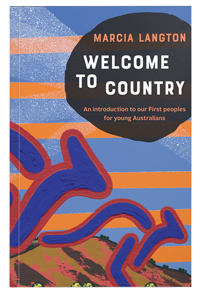 All text extracted from Welcome To Country: Youth Edition by Marcia Langton
Available now at your local bookstore
Click here to find your preferred online retailer