Observations of Dior by Megan Hess

French fashion has long been equated to elegance and French designers have led the way when it came to style and ‘chic’-ness. Megan Hess explores the icons of French style in her new book Elegance and takes you through the hallmarks looks of ten wildly different, but equally stunning French fashion houses with her beautiful fashion illustrations. Here is her take on Dior.

‘Elegance must be the right combination of distinction, naturalness, care and simplicity.’

Christian Dior was a superstitious man. Before a fashion show he would consult his tarot reader, sew a sprig of his favourite flower – lily-of-the-valley – into the hem of his runway looks, and name a coat in each collection after his hometown of Granville. He took every measure to ensure his collections would be met with success, but to me the greatest contribution to his success was not his assortment of good luck talismans but his pure talent.

Dior’s creativity manifested in various entrepreneurial pursuits in his early life before eventually finding its place in fashion. Born in 1905 on the coast of Normandy to wealthy parents, Dior was one of five children. In 1910 his family relocated to Paris, a city he instantly connected with. While Dior’s parents had hopes he would become a diplomat, they quickly realised their son’s talents were pointing in a different direction: the world of fine art.

Financed by his father, Dior opened a gallery that enjoyed much commercial success and even sold the works of his friend Pablo Picasso. Things were moving steadily for Dior until the Great Depression hit and devastation touched the Dior family – his mother and brother died, and a few years later his father’s business collapsed. The tragic events forced the closure of Dior’s flourishing gallery and initiated a turning point in his career.

Forced to create a new path for himself, Dior started selling fashion sketches on the street. His drawings landed him a job illustrating fashions for Figaro magazine, which led to him becoming a design assistant at Robert Piguet, where he worked until he was conscripted for military service.

Returning to Paris after his army duties, Dior worked at fashion house Lucien Lelong alongside a fellow emerging designer poised for similar success, Pierre Balmain. Balmain suggested they go into business together but Dior declined. Perhaps he knew his big break was just around the corner.

That break came when Dior was approached by Marcel Boussac, who owned several factories that had been left empty post–World War II. Boussac offered the factories to Dior to start his eponymous label. Unlike some of the fashion wunderkinds in this book who dived into fashion at a young age, Dior was forty-one when he opened his business in 1946; I find that so inspiring. He had the courage to steer his life in a completely different direction and take a chance on himself.

Dior debuted his first collection of ninety looks in 1947 to critical acclaim. One of his earliest supporters was Harper’s Bazaar’s then-editor Carmel Snow, who famously called the collection the ‘New Look’. This moniker swept the press and left a lasting impression – even today Christian Dior is known as the founder of the New Look.

‘A dress is a piece of ephemeral architecture, designed to enhance the proportions of the female body.’

Dior was a pioneer of post–World War II fashion, masterminding a new style of opulent and extravagant dressing. His designs not only contrasted with the simple straight-line garments of Chanel, but were also in direct opposition to postwar fabric restrictions. Dior’s new look was defined by tailored gowns with cinched waistlines and full skirts – some using metres and metres of voluminous tulle. His Bar jacket (a double-breasted blazer with a cinched waist) and accompanying A-line circle skirt was a novel style for a generation of women looking to reclaim femininity (it’s also one of my personal favourite looks). Dior reignited a spark in French haute couture that had been snuffed out during the war. His garments brought light and glamour back into women’s wardrobes.

Dior’s lasting influence on the shape of French fashion didn’t end there. He also designed the H-line silhouette, which controversially fell just below the knee; the tulip silhouette, inspired by his time gardening in his hometown of Granville; and the Junon dress, which featured individual petal-shaped fabric pieces covered in embroidery and jewels. Dior became known for his lavish designs and would make made-to-measure clothing for his clients, many of whom would travel internationally to be fitted in his atelier.

Dior tragically died of a heart attack in 1957 – just a decade after starting his label. His unexpected death came at the height of the label’s popularity and the world was looking for someone to honour the Dior legacy. That someone came in the form of Dior’s precocious protégé Yves Saint Laurent, who was only twenty-one at the time.

Under intense pressure from his fashion peers and the media around the world, Saint Laurent knew that his first collection as creative director had to be perfect. There was no room for error. In 1958 Saint Laurent launched his Trapeze collection, focusing on looser silhouettes with slim shoulders and swinging skirts: the New Look for a new generation.

Since then Dior’s successors have continued to reference the late couturier’s extravagant elegance while still leaving their own distinguished mark on the house. Following from Saint Laurent was Marc Bohan with his ‘slim look’ silhouette, then Gianfranco Ferré with his architectural style, and then John Galliano, who guided the house of Dior into the new millennium and paved the way for Raf Simons. For Simons’ critically acclaimed debut collection for Dior – Fall 2012 Couture – strapless gowns in hues of soft pink littered the runway in an homage to the dresses of the original New Look. Simons’ journey to creating this first collection was captured in the fascinating documentary Dior and I.

The ultimate feminine brand now finally has its first female creative director, Maria Grazia Chiuri. Her most recent collections incorporate Dior’s classic feminine shapes – such as her silk version of the Bar jacket (2019 Resort) – and edgily pair past and present, with Dior T-shirts emblazoned with feminist slogans and tough biker boots (Spring 2019 Ready-to-Wear).

How the past merges with the present is something I wanted to capture when I was invited to live-sketch Dior’s couture runway show in London in 2017. Illustrating the looks as they moved down the runway was magical, but having the opportunity to draw some of the women attending the show in head-to-toe Dior couture was even more rewarding, because Dior’s clothes are made to be worn and enjoyed. The real fashion shows are always off the runway.

I think it’s remarkable that even though Christian Dior only ran his business for a decade, those following in his footsteps have stayed true to his original sense of style. New looks are born and worn every day but the New Look is in a class of its own, and Dior will always be known for being the man who brought it to the world. 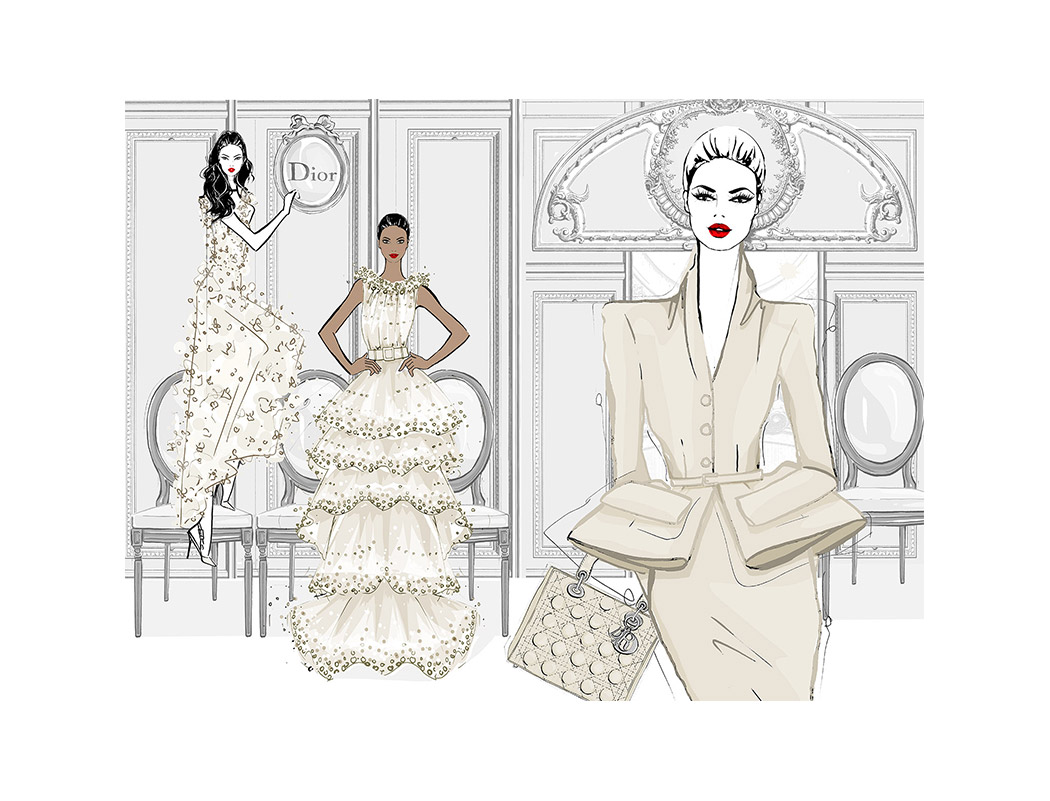 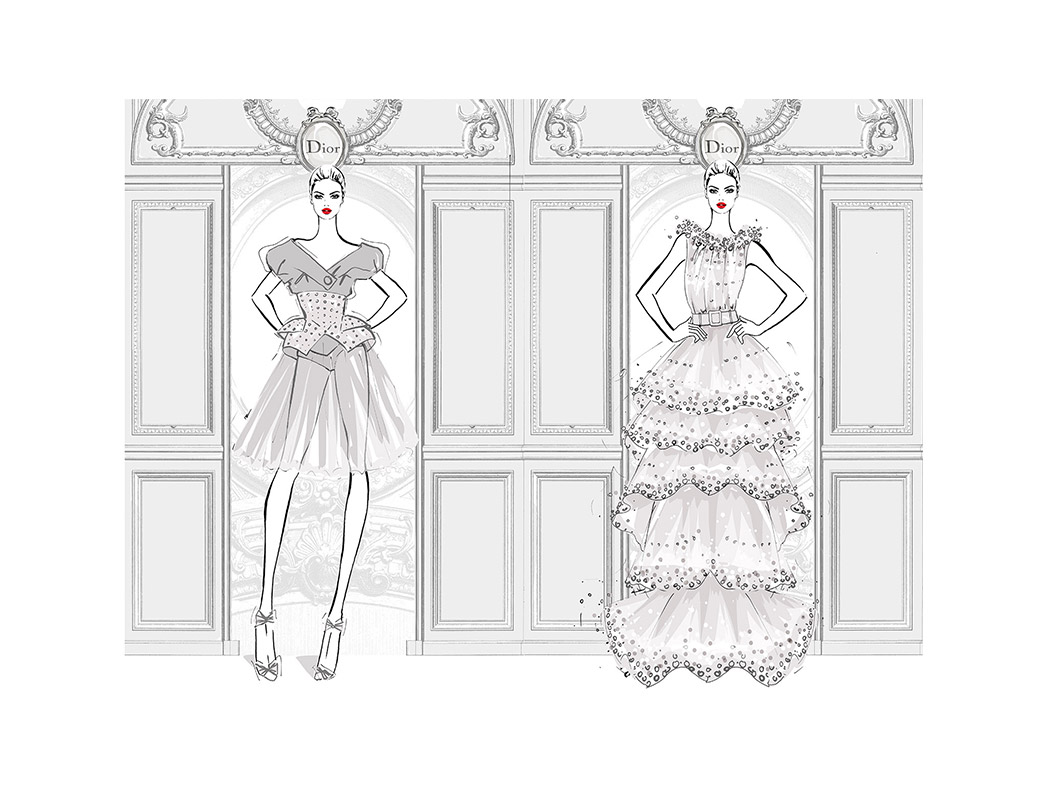 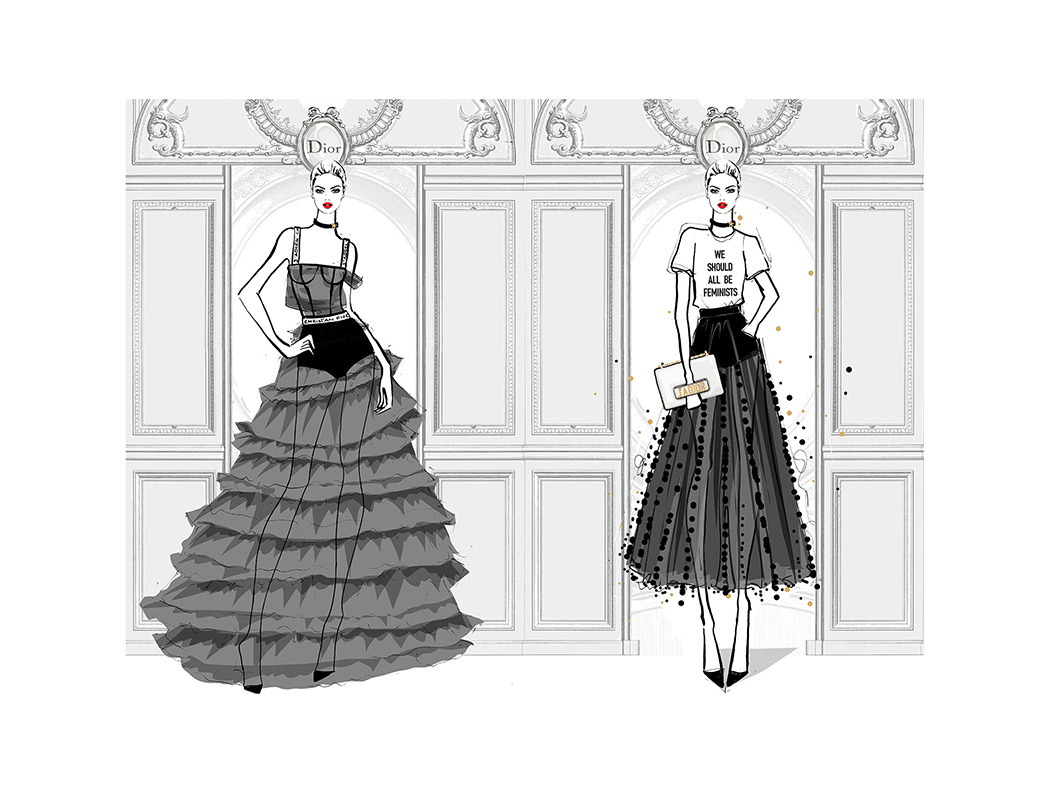 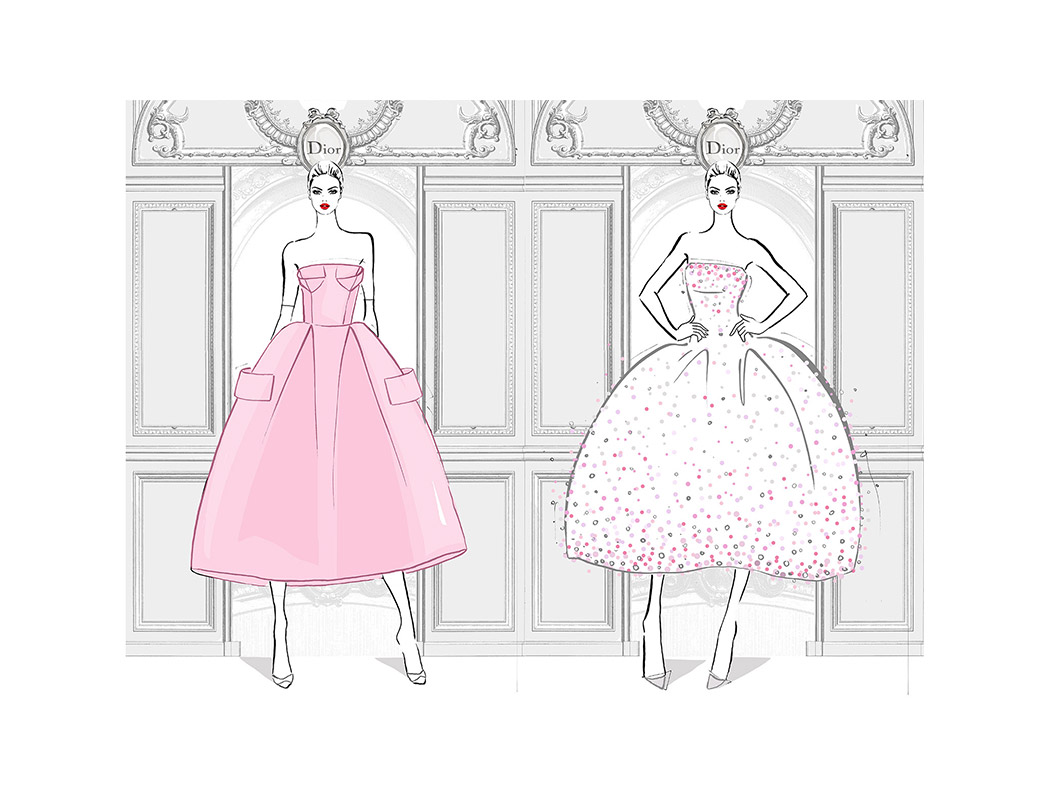 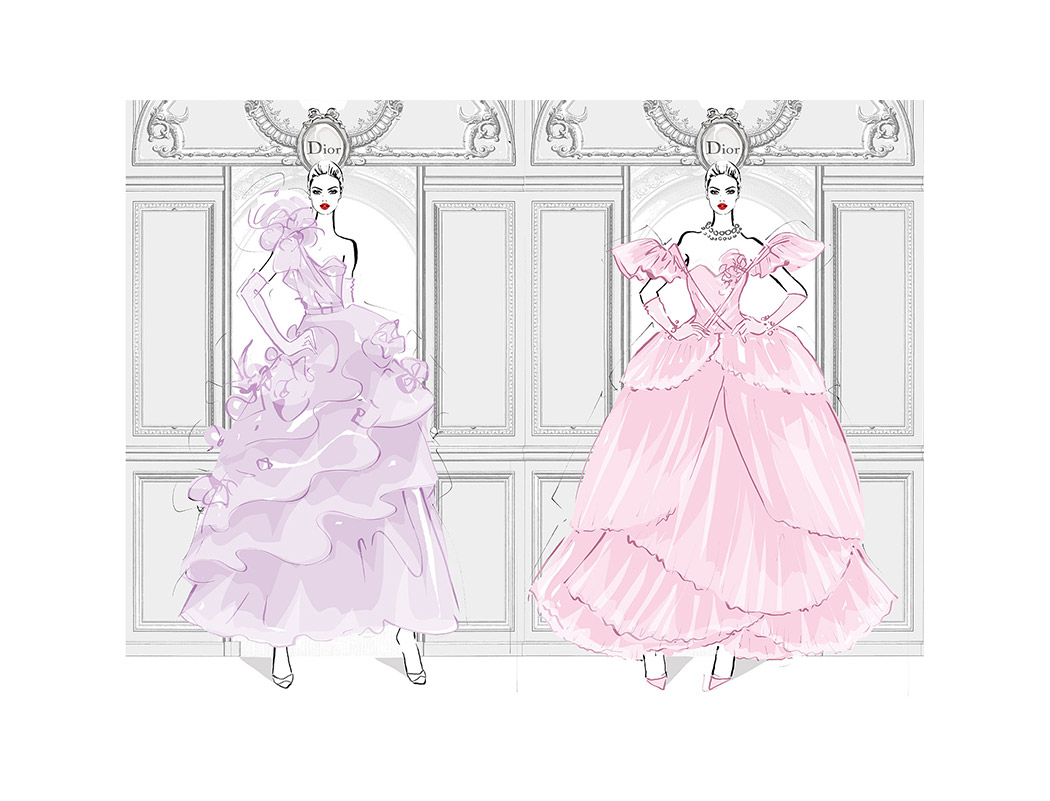 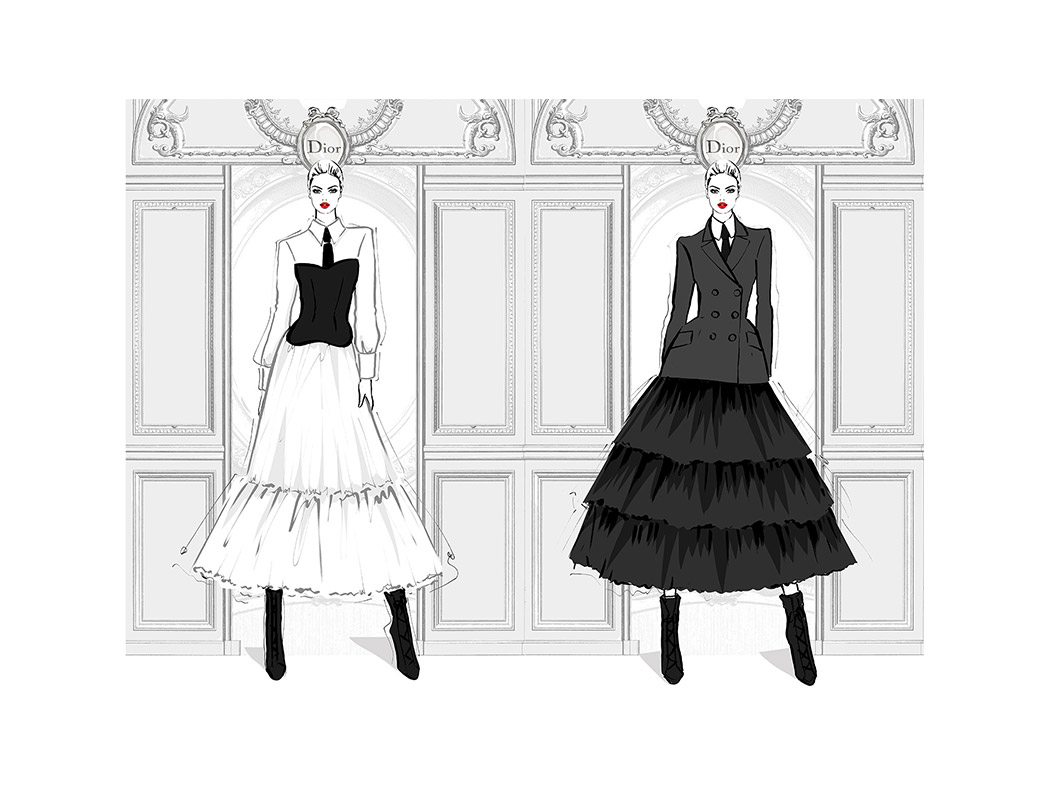 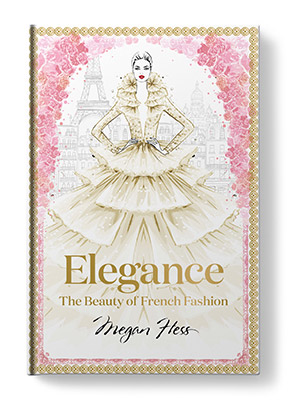