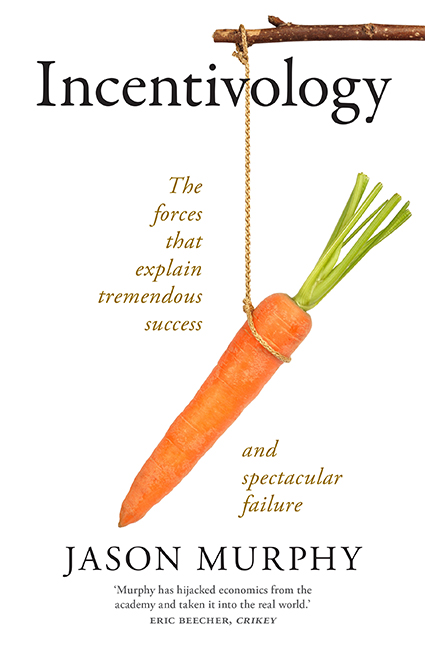 In Incentivology, economist Jason Murphy uncovers the huge incentive systems we take for granted and turns them inside out. Incentives take more forms than you might expect and they can be hard to spot, but they shape our lives in ways that we rarely examine. In this extract, Jason breaks down incentives to its most basic components.

One Saturday in mid December – on a slightly dusty morning after a work Christmas party – we made the trek to The Lost Dog’s Home. Into the first row of cages we went. Cage after cage of heartbreak, but no pooch we could take home.

Into the second row we went. Not right; not at all right …  Wait. In the third cage was a medium-sized dog. Female. One year old. Brown in colour, with ears resembling the muppet Rowlf.

This dog did something none of the other shelter dogs did. It not only came to the front of the cage. Not only wagged its tail. It also made eye contact. Two bright amber orbs looked up at us.

Where other dogs looked cowed and beaten, this dog jumped up and put its paws on the wire. Mouth open, tongue lolling out, tail wagging, bright shining eyes staring into ours.

The sign on the cage said: ‘Curly Coated Retriever Cross. Age: 1. Name: Chianti.’ We had both lived in households with retrievers. And as for Chianti? That could be changed.

We got our pet license, bought a collar and a lead, and came home with the artist formerly known as Chianti in the back of the station wagon.

A dog is a wonderful model for showing the power and pitfalls of incentives. I have learned an enormous amount about incentives from trying to apply them to my dog. Her feedback tells me when they’re motivating. When they’re confusing. When they’re not aligned well with the actual task. When we’ve set up something she can exploit. When we need reward and when we need punishment. And she’s shown me that sometimes you can get the incentive by cheating.

When we got our dog home from the pound, we soon realised she had missed a lot of training. All of it, actually. The dog’s lack of familiarity with the world was so broad and so deep that we had to conclude she had been kept in a shed or garage her whole life.

Susie (as Chianti would now be known) was utterly unable to figure out stairs – when my girlfriend went upstairs, I remember seeing the dog go and look behind the stairs to figure out where she had gone. Ascending or descending was completely out of her capacity to imagine.

Evidence of a deprived life came in many ways. When I put food into her bowl, she would take one mouthful and then run for the back door to get inside the house. Somehow she had learned that the only way to get inside a house was sneaking in when the door was left open by accident. (To be clear, she was welcome inside our house. Her bolting just left me standing by a bowl of dog food, with her peering out at me from inside the open door.)

The saddest thing was her first toy. We threw it to her, it slid across the floorboards, and she just sat there. She had no idea what a toy even was.

This was a dog that had experienced a deprived childhood. The first year is the most important one in terms of neural and behavioural development, so we were wildly behind. The saving grace was she had obviously never been abused. She never cowered when a human approached, moved suddenly, or raised their hand. Instead, she would wag her tail in delight, expecting a pat. This dog had a lot to learn, and so did her new owners.

I thought I knew a bit about dog training. It turned out I’d just been blessed with naturally well-behaved dogs. I was about to get an intensive training course in how to train dogs.

If you see an expert dog, the owner will be controlling it with whistles, commands and gestures. You might conclude that these are the best things with which to train a dog. That is wrong, wrong, wrong. The best thing with which to train a dog is meat. Turns out training a dog without immediate incentives is a bit like running a company without paying your staff. It might be possible, but you’ll struggle mightily to get anything at all done.

As part of the big push to encourage responsible dog ownership, the adoption of our pooch included a few free training sessions. So just after Christmas, the three of us found ourselves back in The Lost Dog’s Home, on a patch of artificial turf. We thought the volunteer trainer would be schooling our dog. He was there to school us.

‘Don’t be afraid to use the treats,’ said the trainer.

I didn’t get it. I somehow saw treats as cheating, or like riding with training wheels. I wanted the dog to show me she understood the trick by performing without the treat.

This is how classical conditioning works. Pavlov didn’t end up ankle deep in dog slobber by ringing the bell some of the time when he fed the dogs.

Later – much later – when the action is thoroughly learned,  the treat can be removed, at least some of the time. In the long run the principle of the poker machine applies – random payouts are more addictive than regular ones. At the early stages, though, nothing is more important than giving the treat. Every time.

Incentivology by Jason Murphy is AVAILABLE NOW at your local bookstore and online.