The drizzle let up as the AIF No. 1 crew neared the start, providing a clear view of the Oxford University Army service crew drifting off the bank of Temple Island Meadow, awaiting their arrival. The two crews drifted on the Henley Reach at a respectful distance, wary of making eye contact as they prepared to do battle. Nothing was being said in the boat. The oarsmen were switching on, silently priming their bodies for the physical onslaught to come. Ahead of them lay over a mile and a quarter of no-man’s-water.

Behind the Australians, the Henley umpire’s launch puttered into view from behind Temple Island, carrying, among others, the official party of the Prince and Princess Arthur of Connaught; the coaches Colonel Norman Marshall and Colonel ‘Tarka’ Gold; the Henley race umpire officiating; Mr Fred Pitman, who was accompanied by Henley stewards as timekeepers; and a boatman. The petrol-driven launch Enchantress swung behind the crews and powered down the motor till the crews tapped towards the start.

The AIF No. 1 crew were to start in the Berks station and the Oxford University service crew in the Bucks station. Both crews paddled towards the dinghies moored in the Buckinghamshire channel alongside Temple Island. Once in position in their stations, they checked their run and then gently backed their boats down to the attendants reaching out from the dinghies, who grasped the stern of the boats, making sure to keep clear of the rudder and steering line.

Mr Pitman, wearing his Cambridge University rowing blazer and cap, stood at the bow of the launch. The Prince and Princess Arthur of Connaught sat to either side of him, followed by the coaches, Tarka on the Bucks side of the launch and Marshall and Ross-Soden on the Berks side, then other invited guests, the Henley boat race officials, and the timekeepers.

Casting a glance at his timepiece, with a minute or two before zero hour, Mr Pitman addressed the crews in a firm, clear voice. ‘Gentlemen. When I see you are straight and ready, I will start you like this. I will say “Gentlemen, are you ready?” And then I will fire the gun. Get ready, please.’

As the crews came forward, nervously checked that their feet were secured in their stretchers and wriggled their backsides, the coxswains, with one hand raised, quietly ordered the bow or number 2 man of their crew to touch the boat around and straighten up for a clear line to the first right-hand bend, and into the boomed straight of the Henley course.

Freddie House relayed Gig’s calls to Archie to ‘touch it bow’. At the same time, in the umpire’s launch, a steward loaded a blank round into the shotgun’s breech, snapped it shut and handed it to Mr Pitman, who turned to Princess Arthur of Connaught and proffered a polite, ‘Perhaps your Majesty may find it more comfortable to cover your ears?’ Both crews now ready, Pitman turned to the oarsmen and called out, ‘Gentlemen. Are you ready?’

When the crowd heard the starting gun, ‘a silence fell for a while … and all eyes turned down the straight mile and a half long reach’.4 Both crews got away to a clean start. The first ten or so strokes are short, sharp and all about heaving the 130-stone-plus (825-kilogram-plus) dead weight of boat and manpower into forward motion, building momentum and translating that into sheer speed. Australia shot out of the blocks at a higher rate of striking than Oxford and edged in front even before they had drawn past the prow of Temple Island. The two crews battled it out into the bend but the Australians still had their bow in front at the half mile and reached the Fawley mark in a quick 3 minutes 25 seconds.

Berrisford, the Oxford stroke, asked for an effort from his crew and increased the rate, closing the gap a little between the two crews, but Disher responded by keeping his length and maintaining his rate of striking low. He asked Gig for more leg drive and finish from the engine room rather than increased rate. Scotty, Hauenstein and Middleton kicked in and gave the boat plenty of shove, turning muscle into motion as they cranked the watts out through the water.

This power meant the AIF No. 1 crew had drawn further ahead by the one-mile mark. An almighty cheer went up from the grandstands situated at the finish when the diggers saw the boat race official hoist up the large red ‘1’ panel at the official mile mark post, signifying the crew in the Berks station was the first to pass the mile mark. Only a quarter of a mile to go.

Carine Pennefather and her cohort of walking wounded were watching the race and willing them on. A few of the boys had pushed forward to the riverbank but the diggers missing limbs were lost in the crush. Despite their injuries and infirmities, some had scrambled up THE K ING’S CUP trees ‘you would have imagined could only have been safely negotiated by ants!’5 They were literally hanging out of the branches for a better view, and yelling at the top of their lungs.

By now, Berrisford knew he had to throw everything Oxford had at the Australians and he wound up his Oxford crew to a very fast rate of 40 strokes to the minute along the Phyllis Court stretch. Disher was in the perfect position to read every desperate move the Oxford crew made. The risk of lifting the strike rate is that often the length of the stroke in the water shortens – particularly when fatigue sets in and the mind crumbles in panic. Disher kept his nerve and was now striking a lower rate than Oxford but maintaining the vital speed of the boat through the water.

There is sometimes a perception that a crew somehow rows faster at the finish because they ‘draw away’ – but perceptions can be deceptive. A crew has pretty much given their physical all by then. The reality is often that the other crews, even though they are moving rapidly up and down the slide inside the boat, tapping out a faster stroke rate, are often rowing shorter, fading away in power, and actually slowing down. This creates the misleading impression that the leading crew is drawing away.

To the masses of diggers cheering from the banks, it would have looked like the Aussie boat was suddenly accelerating on the water. Not quite – they were ploughing ahead, steady as she goes, while the Oxford crew’s shortening left them slowing. They had fallen away to one length behind – but then steadied, hanging on with a dose of pure English grit. George Mettam’s Scottish cousin Pollie, who had come to the regatta with Mettam’s brother Frank, caused a moment of amusement among the well-heeled society crowd, ‘calling on “George!” in her Scotch tongue!’6 Disher recalled, ‘They came at us, it is true, but we rowed home with the same old swing to the end, not quickening.’7 As the AIF No. 1 crew neared 100 yards from the finish line, one length clear of Oxford, the roar from the diggers (and probably the Canadians and the New Zealanders) was deafening.

On the riverbank, Pennefather was ready and her orderlies lifted the legless boys out of their wheelchairs at the last moment and hoisted them onto their shoulders ‘so that they saw splendidly!’8 The AIF No. 1 crew crossed the finish line in a fast 7 minutes 7 seconds – the fastest time recorded for the eights throughout the whole of the Royal Henley Peace Regatta. The Perth Daily News enthused:

They were physically the most powerful crew ever seen at Henley Regatta. They owed their victory to their racing experience and their marvellous uniformity. They were short in the water and had little grip of the water behind the rigger but had a powerful middle and finish to the stroke. What they did they did together and with great back force.

Inside the boat, as they crossed the finish line, all the Australians knew was that it was over. They heard only a muted roar. A crushing weight had been lifted from their heaving shoulders. There was no fist pumping or splashing of water, no victory cries. This very public victory was, in the grand scheme of things, a pale echo of the larger contests they’d come through. Victory for the oarsmen had meant surviving a global catastrophe and living to tell a yarn or two when others did not. 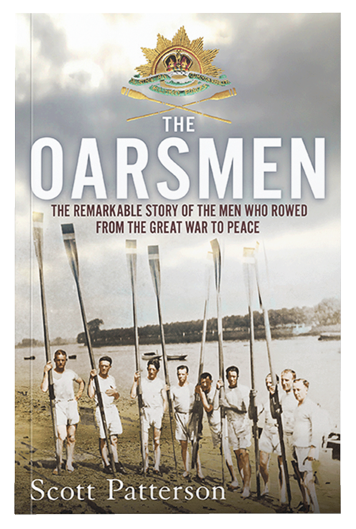