On the Master Sommelier Introductory Exam

I’m not sure why I initially took the Introductory exam.

A few friends at work were doing it, so I jumped on board. I had no thoughts of ever becoming a Master Sommelier. It just seemed like the thing to do.

The Intro exam through the Court of Master Sommeliers is a two-day course that culminates in a multiple-choice test. The course is a whirlwind snapshot of the world of wine. Italy in 40 minutes. Spirits in 30 minutes. Eastern Europe in 15 minutes. The Masters hit the major points of interest in each region, more as a guide to future studying than an exact curriculum for the exam. Though, on occasion, a point of information is said with a wink, a gesture of you should probably know this for the exam. I remember the ﬁrst growths of Bordeaux were said in such a manner. I made sure to learn them that night.

Though the Introductory exam doesn’t test service or tasting skills, the material is introduced. There is a service demonstration. All I remember from mine was a Master carrying a tray loaded with way too many ﬂutes and pouring Champagne excruciatingly slowly. Working retail at the time, I didn’t have a clue how wine service worked, nor did I have any skills in that regard.

Blind-tasting was also a relatively new concept to me. In the exercise they set for us, each table “took” a wine that they would “blind” out loud to the whole group. One person on the table would stand up and describe the sight, the next would describe the nose, the third would describe the palate, the fourth would give an initial conclusion, and the ﬁfth would provide the ﬁnal conclusion. The sixth, seventh, and eighth people lucked out.

About three years into my wine career at this point, I could accurately describe wines…when I knew what they were. Having to describe a wine whose grape and region I did not know seemed like an entirely different skill to me, and one I had not yet developed. Then having to make a conclusion based on that description was even more daunting.

They got to my table and chose a girl three seats to my right to start. Initial conclusion! Damn, the hardest, I thought. After hearing the people before me describe the sight, nose, and palate, I would have to come up with a shortlist of what I thought the wine could be.

Luckily, I was a good test-taker, even if I wasn’t a good blind-taster. I listened as the people before me threw darts at the wall to come up with descriptors. Then I watched the Masters’ faces. When the descriptors were good, the Masters would look encouraging and hopeful, even nodding slightly with their eyes. Yes! Go! You got it! You can do it! When the descriptors were less good, the Masters looked down or to the side, an expression of benign disappointment on their faces. Instead of reading the wines, I read the Masters. Like a true psychopath.

“Red plum.” That was a yes. “Cranberry, rhubarb, red cherry.” All yeses.

“Blackberry pie.” Nope. “Blueberry.” Not really. “Craisin dust.” That one wasn’t a no or a yes, more a why?

“Graphite.” Not really. “Saddle leather.” I don’t think so.

I collected that this was a red-fruited red wine. It was pale in color and I could see through it (I was sure about that one). It was aged in oak, thus the vanilla and cedar notes. It was a little ﬂoral. It wasn’t terribly earthy.

“Umm…for my initial conclusion, I think this is a Pinot Noir from California,” I said. The Masters had that hopeful and encouraging look, but also seemed to expect more. The woman next to me – the lucky girl who got to drive home my perfect pitch – nudged me. “You’re supposed to say more than one thing."

But I couldn’t think of anything else it could be. Nothing else made sense for the matrix of descriptors we’d assembled. I had to say something, though. “Umm…it could also be Pinot Noir from Oregon?” This was probably an unsatisfactory answer, but they let me move on.

I later learned that what I had just done was pretty much the deductive method. Only, it’s supposed to be based on your own tasting observations and not the facial expressions of Master Sommeliers. Details. The wine turned out to be Russian River Valley Pinot Noir. And I felt pretty smug about that. 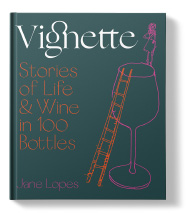