Whitcoulls
Hailed as Australia's Willy Wonka, Darren Purchese is renowned for his stunning high-end dessert creations. Known as the chef with the tricks, with a scientific approach to food and ingredients, in Lamingtons & Lemon Tart, he turns his eye to the classics, cast with his trademark flair for the home cook who might be ambitious, but also wants to feel that the recipes are within their grasp – and that ingredients can be sourced with ease. Alongside this line-up of classics, he includes a selection of his favorite modern creations, from Caramelized white chocolate mousse to Explosive raspberry wagon wheels; Lemon meringue pie éclair; Canneles; Passionfruit clouds; and his big-selling Popcorn and honeycomb rubble. And, for the breakfast fans, Darren's winning Granola, his take on American pancakes, and the decadent Brioche French toast with cinnamon ice cream. Recipes are divided across eight chapters (cakes, choux pastry, desserts, snacks, tarts, breakfast, confectionary and frozen dessert), while Darren also takes readers through the basics of what he considers to be “sweet essentials”, including batters, confectionary, caramel, pastry, meringues, jellies, and chocolate garnish. Complete with stunning pared back photography, this package will set itself apart as the next big baker's must-haves. 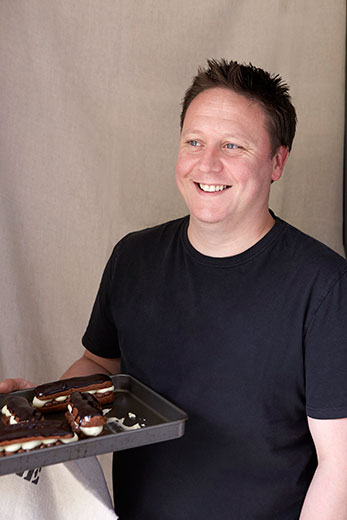 British-born pastry chef Darren Purchese has won a loyal, enviable following over five years with his Sweet Studio Burch & Purchese, on Chapel Street in Melbourne. Darren has played a prominent role on MasterChef over successive years (he was responsible for the passionflower pressure test, one of the highest rating episodes in 2015). Together with wife Cath Claringbold, he has built a reputation for stunning feats of sugary deliciousness