How to use cognitive biases to create more effective content

How to use cognitive biases to create more effective content

By the end of this article you might be left wondering why consumer behaviour is not a full-blown marketing major (yet).

Whether we’re aware of it or not, applied psychology is behind the world’s most memorable and effective campaign ideas, content and experiences. Strategists, planners and marketing scientists act as wizards of human behaviour, leveraging known cognitive and emotional quirks to capture attention, influence perception and drive action.

Put simply, they are playing to cognitive biases, or systematic errors in human judgment; a concept I’d like to explore more deeply and demonstrate through some key tactics.

But before we go there, let’s cover off the basics.

What is cognitive bias?

The human brain is wired to minimise effort and conserve energy, a design that most likely dates back to the days when we weren’t so sure where our next meal (energy source) would come from. Our default setting is to use heuristics (or mental shortcuts) to process information, which helps make our decisions quicker and more effective. While this can be very beneficial, our predisposition to minimise thinking can lead to cognitive biases that can cloud our judgment and make us less rational.

Cognitive biases arise because of our individual experiences. Each and every one of us creates our own distinct version of the world based on what we have paid attention to; we then use the memories we’ve stored from past experiences to interpret the world around us, which influences our behaviour.

Nobel prize-winning academic researchers Amos Tversky and Daniel Kahneman (the author of Thinking, Fast and Slow) have repeatedly shown that when the same information is presented to us differently (for example, it’s framed positively and then it’s framed negatively) we make completely different decisions, which is how we know cognitive biases underlie human understanding and effective communication. Their work in this space is fascinating – here’s a taste.

What are the most common cognitive biases?

I'm not sure that marketers or academics agree exactly on how many cognitive biases there are, or even if there’s a globally recognised catalogue (here’s a Wikipedia list). If you ask me, when any list gets over 10 items it’s very difficult to remember. The easiest way I’ve found to navigate the domain of cognitive biases is through the work of Buster Benson, a marketer from Slack, who has organised over 175 biases into 20 categories and four core “problems” or conundrums that all biases help humans to overcome.

While it’s not exactly scientific, I like that this approach is very intuitive and easy to understand. 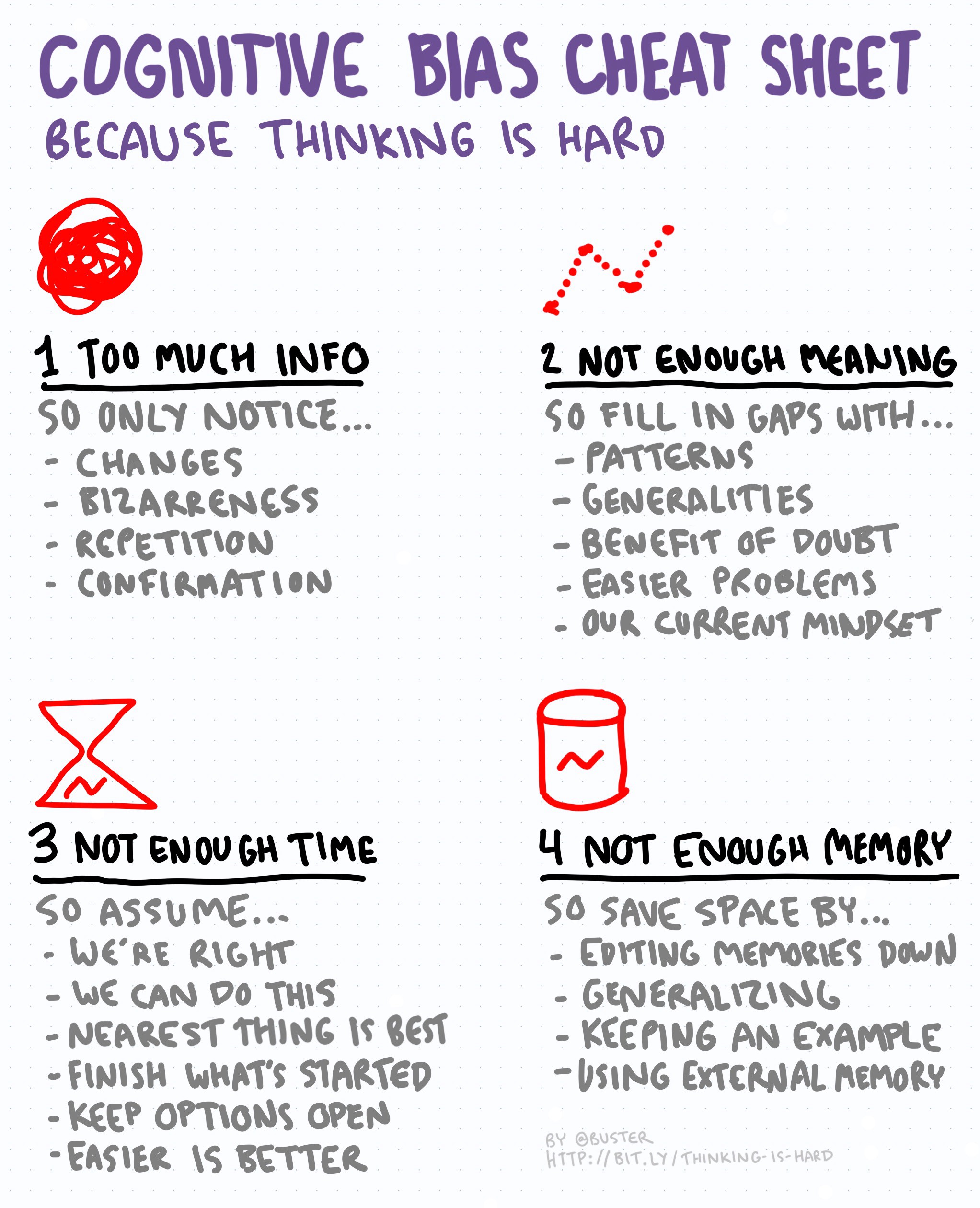 You can see from Buster’s work that there are some shared patterns in behaviour, which means we can almost predict how a lot of people are going to respond to something, or what might work to drive an intended action.

Side note: the Cognitive Bias Survival Guide is also quite handy. And if you’re really into it, look up “behavioural economics”.

How can we use cognitive biases in content marketing?

I would be doing you a disservice if I didn’t shout out Dan Monheit, the director of strategy and owner of Hardhat, who co-hosts the popular podcast Bad Decisions. It’s an episode-by-episode account of common heuristics and biases, which he brings to life through banter with psychologist and researcher Dr Melissa Weinberg. It’s oriented towards brand strategy and advertising campaign ideas, but it’s a great listen and worth every minute.

Now that’s out of the way, let’s look how you can approach your content marketing with cognitive biases in mind.

The mere-exposure effect is a mental shortcut that helps us avoid becoming overwhelmed by too much information. Instead, we develop a preference for the things that we see around a lot.

This concept, which is also known as the familiarity principle, is 101 in advertising and marketing. In fact, it’s what the whole idea of advertising is built on – repetition. When brands are consistent and deliver high frequency communications across relevant media, they stick in people’s memories and prime them to feel positive about a product, service or idea just through mere exposure.

In content marketing and publishing, the same idea holds true. If you can develop an identity system, both visual and tonal, and stick to your knitting on subject matter for a niche audience, then your brand will become synonymous with certain ideas and individuals will become familiar with what you stand for. This principle also ties in neatly to distribution or media strategy and re-targeting.

Loss aversion is a mental shortcut that helps us avoid becoming stressed about not having enough time. Instead, we allocate more value to the things we already own.

This has been demonstrated through prospect theory, a theoretical model that shows how people make decisions under risk and uncertainty. The idea of avoiding a loss is twice as powerful to us as the equivalent gain. Put simply, we are much more likely to take a risk to avoid a loss, and the way that a potential gain or loss is phrased can influence our perception and ultimate action or decision.

In content marketing and advertising, language is key: someone is much more likely to avoid a surcharge than they are to go for the equivalent presented as a discount. They are also more likely to want to save $5 than gain $5 cash back. This is something to consider in your pricing communications and conversion-focused content. Other great marketing tactics include loyalty programs that accrue points or status, scarcity and time-bound deals, and trial offers.

The bandwagon effect is a mental shortcut that helps us overcome the sense that something lacks meaning. Instead, we will assume that if everyone else is doing it, it’s the right thing to do.

We’ve all heard the expression “jump on the bandwagon”. These days it's possibly more common that we talk about the need to curate and present “social proof” (or at least I know that’s a term I throw around a lot!). The bandwagon effect describes the idea that we are more likely to act on something if it’s seen as the common behaviour. Also known as “group think” or “herd mentality”, this bias is at the heart of most brand and product launches, or purpose-driven campaigns that are engineered to start a movement. It’s also an essential component in social media and PR strategy.

In your content marketing, you can play into this bias by leveraging influencers across different social circles, or including ratings, reviews and testimonials on landing pages and content hubs. You could also curate user-generated content with a tool like Stackla to add an extra dimension to your blogs, articles and campaigns. At the end of the day, it’s about amplifying an idea or belief so that it feels culturally significant.

The peak-end rule is a mental shortcut that helps us overcome a lack of memory space. Instead, we consider a small snapshot of a past experience (because it takes up less memory space) to determine how we feel about it.

This heuristic says that we are prone to remember and judge an experience based on how emotionally intense it was, and how we felt during its peak and its end. This contrasts with what most of us would consider a more rational way to judge experiences – to look at the average or sum of every moment.

The peak-end rule holds regardless of whether the experience was positive or negative. Importantly, we only view things through this bias if the experience has a clear start and end, so it’s commonly seen in designing customer service, hospitality and tourism experiences. But it’s also prominent in anything from home loans to luxury goods.

To play into the bias, we need to create wow experiences that stand out and target a specific context or moment of truth. Imagine for a minute that you’re a property developer and about to hand over the keys to a client. You might deliver an unexpected limited-edition custom gift book on interior design with a personal handwritten note. This would give that client a positive memory of the experience, despite the anxiety-laden days they may have had in the lead-up.

What other biases or heuristics can you think of that might be relevant to content marketing? Hit me up at katethompson@hardiegrant.com