Chatbots and why your brand needs to talk the talk

Chatbots and why your brand needs to talk the talk – literally

There are certainly a lot of new buzzwords floating around at Mumbrella360 this year, and one is the notion of conversational commerce. But what is it and why should it matter?

In a keynote address by Christie Olson, the Head of Evangelism for Search at Microsoft, the lid was well and truly lifted on current and future trends around AI and its evolving role in marketing.

It’s no secret that search is evolving at a rapid and debatably confronting pace, changing the way that brands advertise and audiences consume messaging. In this ‘information age’ and ‘age of assistance’ however, there is a fundamental shift in mindset that we, as marketers, need to realise.

Olson, in her quirky presentation, said quite defiantly that when it comes to artificial intelligence, marketers need to review their focus.

In marketing, as it is in life, it’s in our DNA as humans to search for things. To question is to search; so rather than indexing information to service a need, technology is now required to understand humans. Understanding what makes a behaviour human in order let the intelligence drive a customer experience. We need technology that can perceive, learn, reason, assist in decision-making, and act to help us solve problems, as they happen.

Olson went on to prove just how intelligent AI is becoming through a case study called The Next Rembrandt.

Made solely from data derived from 346 known paintings by Rembrandt, a 17th century Dutch artist known as one of the greatest painters in European art, The Next Rembrandt was created from a deep, 18-month analysis of his work.

It’s been almost four centuries since the world lost Rembrandt van Rijn’s talent. Via a facial-recognition algorithm learning Rembrandt’s techniques, pixel data guiding the computer to mimic brushstrokes, and an advanced 3D printer, his new ‘work’ was brought to life. The portrait consists of 148 million pixels and is based on 168,263 fragments from Rembrandt’s portfolio.

Here is his ‘next work’ according to data: 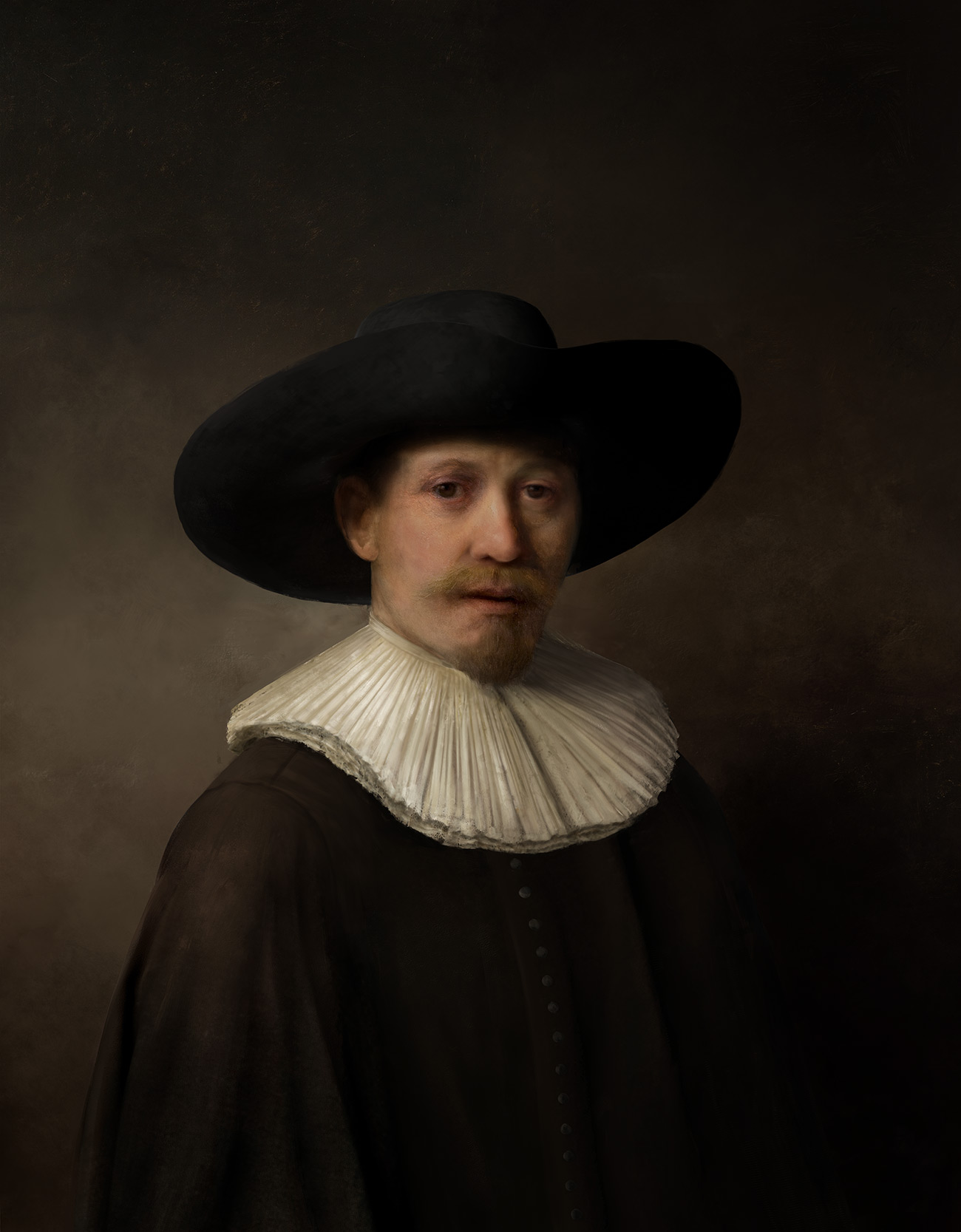 Source: Vinesh Gayadin- The Next Rembrandt

Compared to his other works, the painting was unveiled and exhibited in Amsterdam. The campaign garnered 10 million Twitter impressions on launch day and has been featured in 1,400+ articles. On launch day, stock values for ING and partner Microsoft increased (ING ^1.22 per cent, MSFT ^0.49 per cent). Post-launch, Google search interest for ING increased 61.29 per cent, and 20 per cent for Microsoft.

The technology developed is now used for restoration of damaged and partially lost masterpieces – which makes it even cooler (in my opinion).

When the case study was presented, the room was silent. I don’t know if it was awe, or mass confusion, but jaws were on the floor. And this is just the beginning of intelligence capabilities in marketing. But there is work to do…

Intelligence needs to be seen as more than a smart speaker (think Google Home and Vine videos of grandparents trying to engage with the technology) or Siri telling you the weather every morning.

We’re now moving into a space of conversational commerce, where conversations with brands in formats like speech and chatbots will build essential foundations of trust, loyalty and retention between brand and customer. In turn, these conversations will drive commercial return.

But what’s a chatbot? Put simply, its an artificial intelligence system that you interact with via text. It can be straightforward, like asking a bot to give you a weather report, or more complex, like having one troubleshoot a problem with your Wi-Fi. Think of it like an automatic conversation machine that can talk to people in a relatively human-like way about limited subjects.

As the Wall Street Journal notes, social media and messaging apps have given way to the rise and popularity of chatbots. Facebook’s properties and WeChat, a popular consumer technology platform in China, have been leading the way.

“Facebook signalled the messaging stakes in 2014 with its $22 billion cash-and-stock deal for WhatsApp. That service and Facebook’s Messenger app rank solidly as No. 1 and No. 2, respectively, in monthly average users, according to Activate’s data… Interest is intensifying. One reason is the rise of China’s WeChat, a unit of Tencent Holdings Ltd. that helped pioneer wider uses than chat such as hailing rides, booking doctor’s appointments, and sending money to friends.”

Thanks to these platforms and their massive audiences, the use of chatbots will only continue to increase.

Here's an example of a chatbot from Mastercard (in partnership with Kasisto) in action. Customers can ask it specific questions about their bank account and spending habits. Again, it’s pretty awesome stuff.

Imagine if you were in a car bingle, and the bot got your insurance company to send a replacement car to your exact location. Extrapolating these scenarios and ideas is exciting, but also takes an education piece on the consumer side to ensure it’s #utilised (another Mumbrella buzzword).

It’s the ease of this, the conversation that consumers can have with chatbots and AI functions, which will help brands genuinely add value to their customers’ lives. Olson’s key point here was that brands need to think conversationally because consumers expect conversations from your your brand. The conversation needs emotive language, it needs personality and it needs to create an emotional connection between consumer and brand.

Moving forward, brands need to educate themselves on the assistance they can bring and adapt their platforms because today’s customers are looking for fewer links and more answers, fewer screens and more voices, less clicking and more action.

What a time to be alive.